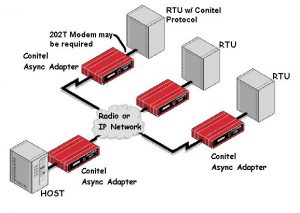 The Conitel ASYNC ADAPTER is easy to set up. A 9600 bps RS232 management port can be connected to a dumb terminal or a PC running a terminal program. Menus are in clear, concise English.
About the Conitel Protocol: